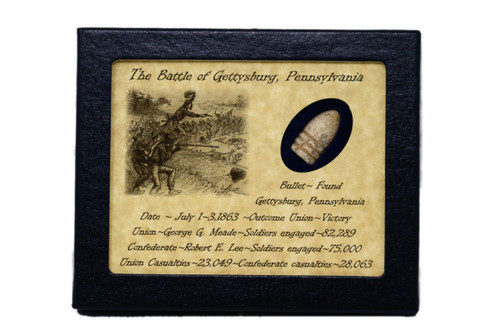 The Battle of Gettysburg was a turning point in the Civil War. The Union Victory that ended General Robert E. Lee's second and most ambitious invasion of the North. Often referred to as the "High Water Mark of the Rebellion." Gettysburg was the Civil War's bloodiest battle and was also the inspiration for President Abraham Lincoln's immortal, "Gettysburg Address".

Two holes on back of case for wall mounting

You will receive a different bullet from pictured. Only presentable bullets will be used.

Shot Bullet Relic from The Battle of Gettysburg, Pennsylvania with Display Case and COA