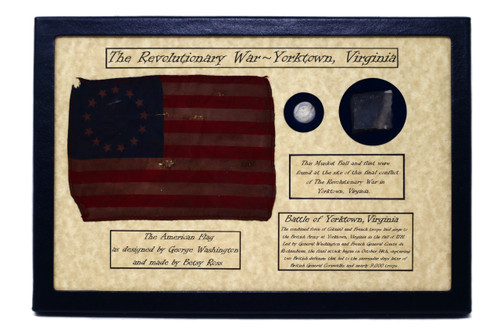 
"The Battle of Yorktown, Virginia
The combined force of Colonial and French troops laid siege to the British Army at Yorktown, Virginia in the Fall of 1781. Led by General Washington and French General Comte de Rochambeau the final attack began on October 14th, capturing two British defenses that led to the surrender days later of British General Cornwallis and nearly 9,000 troops."
This Musket Ball and Flint was found at the site of this final conflict of The Revolutionary War in Yorktown, Virginia.
The American Flag as designed by George Washington and made by Betsy Ross
The flintlock mechanism has a hammer with two pieces of metal that act as jaws and are tightened by a screw. These jaws hold the sharp, squared flint (witch is what you are buying). When the shooter pulls the trigger, it releases a spring loaded flint striker. The flint striker ignites primer in the primer pan which then goes to ignite the black powder thus expelling the projectile.
USA Made Glass Top Display Case ( 12 x 8 x 3/4”)
This case comes with a "Certificate of Authenticity"
Southern Star GUARANTEES  this product to be AUTHENTIC & GENUINE
×

Shot Bullet Relic from the Siege of Yorktown, Virginia with Display Case and COA

Revolutionary War Bullet from Yorktown, VA in a 8 x 12 Display Case with COA