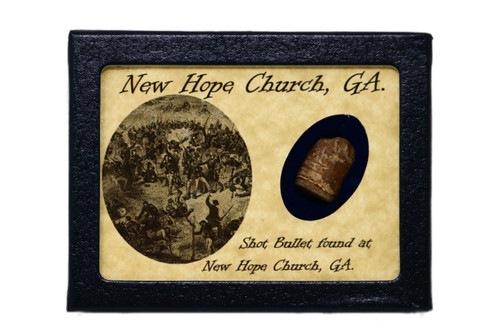 After Johnston retreated to Allatoona Pass on May 19-20, Sherman decided that he would most likely pay dearly for attacking Johnston there, so he determined to move around Johnston’s left flank and steal a march toward Dallas. Johnston anticipated Sherman’s move and met the Union forces at New Hope Church. Sherman mistakenly surmised that Johnston had a token force and ordered Maj. Gen. Joseph Hooker’s corps to attack. This corps was severely mauled. On the 26th, both sides en-trenched, and skirmishing continued throughout the day. Actions the next day in this area are discussed under Pickett’s Mills.
A shot bullet that was found at New Hope Church. Each bullet comes in a matted display case (3" x 4") stating location where found.
This case comes with a "Certificate of Authenticity"
Southern Star Display GUARANTEES this product to be AUTHENTIC & GENUINE
×

Shot Bullet Relic from the Battle at Chickamauga, Georgia with Display Case and COA

Shot Bullet Relic from the Battle at Atlanta, Georgia with Display Case and COA