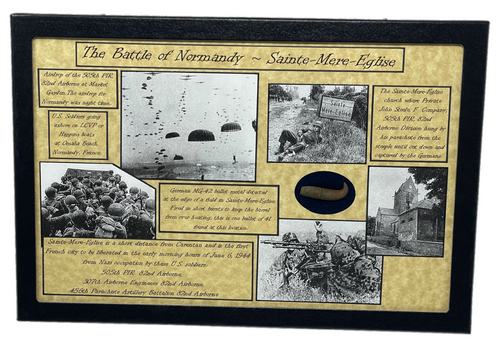 The Battle of Normandy - Sainte-Mere-Eglise

"German MG-42 bullet metal detected at the edge of a field in Sainte-Mere-Eglise. Fired in short bursts to keep the barrel from over heating, this is one bullet of 41 found in this location.

Sainte-Mere-Eglise is a short distance from Carentan and is the first French city to be liberated in the early morning hours of June 6, 1944 from Nazi occupation by these U.S. soldiers: 505th PIR 82nd Airborne, 307th Airborne Engineers 82nd Airborne, 456th Parachute Artillery Battalion 82nd Airborne. The Sainte-Mere-Eglise church where Private John Steele, F company 505th PIR, 82nd Airborne Division hung by his parachute from the steeple until cut down and captured by the Germans. Airdrop of the 505th PIR, 82nd Airborne at Market Garden. The airdrop for Normandy was night time. U.S. Soldiers going ashore on LCVP or Higgens boats at Omaha Beach, Normandy France."

WW2 Dug American Shot Relic Bullet .50 from The Battle of The Bulge with COA

WW2 Dug American Shot Bullet Casing .30 M1 from The Battle of The Bulge with COA

WW2 Dug Shot Bullet American .50 Caliber from The Battle of The Bulge with Case