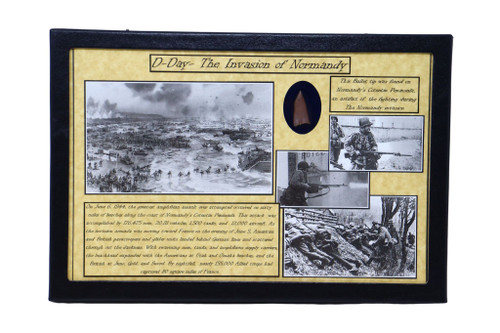 The Invasion of Normandy

"This Bullet tip was found on Normandy's Cotentin Peninsula an artifact of the fighting during The Normandy Invasion.

On June 6, 1944, the greatest amphibian assault occurred on sixty miles of beaches along the coast of Normandy's Cotentin Peninsula. This attack was accomplished by 176,475 men, 20,111 vehicles, 1,500 tanks and 12,000 aircraft. As the invasion armada was moving toward France on the evening of June5, American and British paratroops and glider units landed behind German lines and scattered throughout the darkness. With swarming men, tanks, and amphibious supply carriers, the beachhead expanded with the Americans at Utah and Omaha beaches and the British at June, Gold, and Sword. By nightfall, nearly 155,00 Allied troops had captured 80 square miles of France."

You receive a different bullets than pictured. Only presentable bullets will be used.