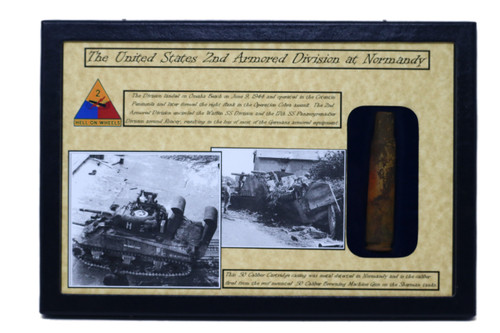 "The Division landed on Omaha Beach on June 9, 1944 and operated in the Contentin Peninsula and later formed the right flank in the Operation Cobra assault. The 2nd Armored Division encircled the Waffen SS Division and the 17th SS Panzergrendier Division around Roncey, resulting in the loss of most of the Germans armored equipment.

This .50 Caliber Cartridge casing was metal detected in Normandy and is the caliber fired from the roof mounting .50 Caliber Browning Machine Gun on the Sherman tanks."

Two holes on back of case of wall mounting